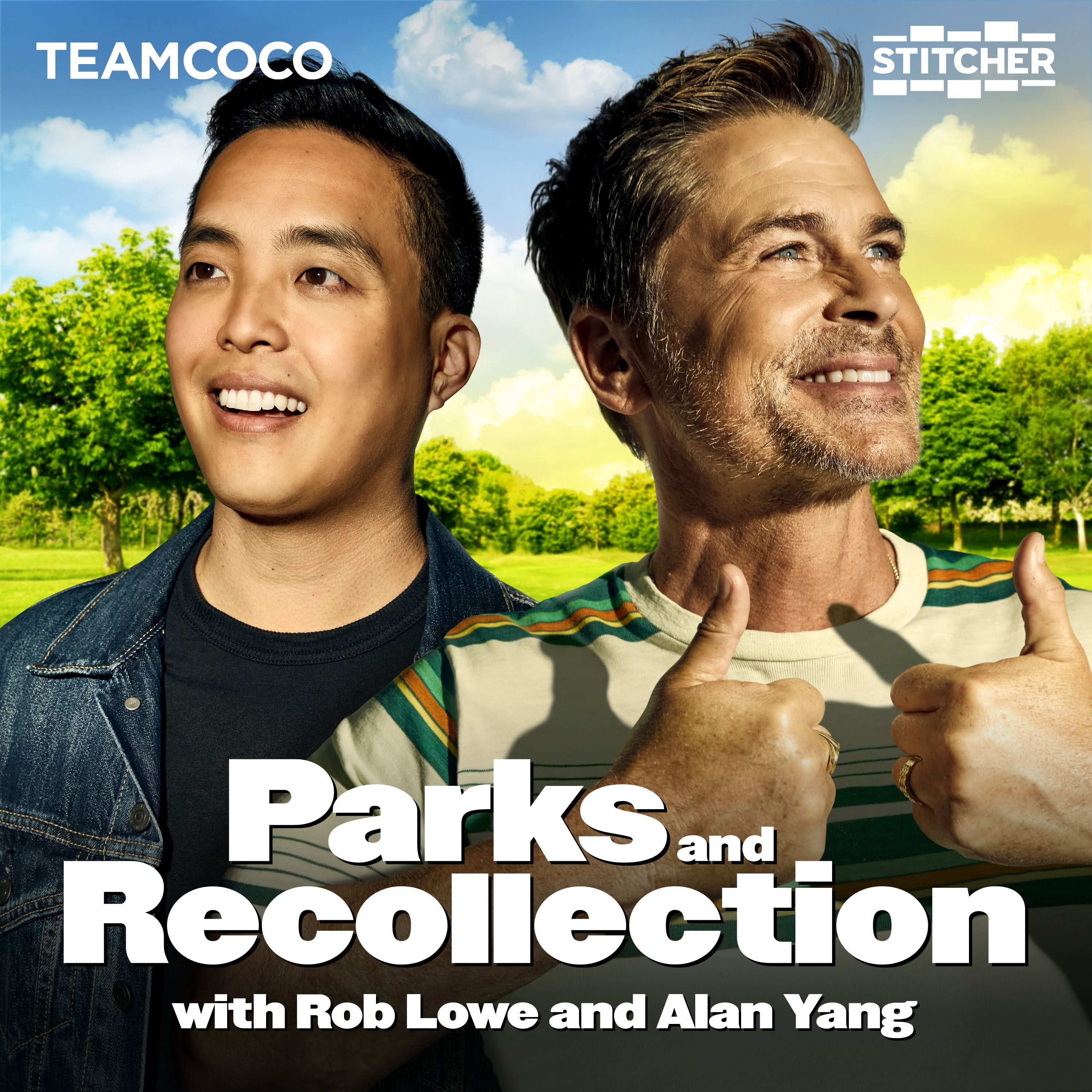 from Parks and Recollection

by Team Coco and Stitcher

Grab your banjo and put on your seatbelts because today Rob Lowe and Alan Yang are watching S3E14 of Parks and Recreation! In "Road Trip" Chris sends Leslie and Ben on a trip to the capital while Tom's new game creates tension between April and Andy. In this episode you'll hear why the rare bonding moment between Ann and April was important, Mike Schur's love of Neutral Milk Hotel and hate for hot fruit, how RoLo's Banjo improv came to be, and why creating a mix CD is a true artform. All of this and a subtle lesson in mainland Mandarin! Got a question for the Pawnee Town Hall or do you eat Cheez-its with raisins? Send us an email: ParksandRecollectionTownHall@gmail.com Or leave a 30-Second voicemail at: (310) 893-6992

Leslie still harbors strong romantic feelings for Ben, but cannot date him due to Chris Traeger’s strict policy against workplace dating. Just as Ann suggests to Leslie that she should avoid being alone with Ben, Chris asks Leslie and Ben to drive to Indianapolis to pitch Pawnee as the next host of the Indiana Little League Baseball tournament. Leslie and Ann devise numerous boring conversation topics for the trip to prevent it from becoming romantic. After an awkward drive to Indianapolis, Leslie and Ben speak before the Little League Commission, which seems reluctant to choose Pawnee for the tournament. Ben delivers a heartfelt speech about the town, but also appears to be secretly speaking about his feelings for Leslie.

Meanwhile, Tom asks Andy, April, Jerry and Donna to participate in a new game show called Know Ya Boo, that he is hoping to pitch to networks; he admits that it is a rip-off of The Newlywed Game. It quickly becomes clear that Jerry and Donna know much more about each other than the recently married Andy and April. When April reveals her favorite band is Neutral Milk Hotel and not Andy's band Mouse Rat, Andy angrily leaves the game. April and Andy have a big fight which causes him to quit his music. April seeks advice from Ann because, although she dislikes her, Ann previously dated Andy for several years. Ann tells April she has to be supportive of Andy no matter how she feels. The next day, April brings the other members of Mouse Rat to city hall and surprises Andy by singing one of his songs. A thrilled Andy reconciles with April.


In a separate C Story, a young girl named Lauren (Alyssa Shafer) asks to interview Ron for her school's field trip assignment to city hall. Ron initially resists, but soon espouses his libertarian beliefs to her. He illustrates the concept of taxes by eating 40 percent of Lauren's lunch, to compare his actions to those of the government. She eagerly accepts his anti-government views. The next day, Lauren's furious mother reveals her daughter's assignment was "Why Government Matters", and that Lauren simply wrote "It doesn't". Ron apologizes, and later tells Lauren she should keep her views on government to herself until she gets older.

Ben’s speech clearly impresses both the judges and Leslie, and Pawnee is ultimately selected for the tournament. Leslie reluctantly accepts Ben's invitation to a celebratory dinner that night, where Ben brings up his feelings for her. She slips away to call Ann for advice, and Ann urges Leslie to act on her feelings. Just as Leslie decides to do so, she is surprised to find Chris has arrived at the dinner to congratulate the two personally. He insists they sleep at his home in Indianapolis, ruining their night. The next day, Leslie and Ben run into each other alone and Ben reveals Chris is out for the day. Ben then immediately kisses her, to which Leslie reciprocates, leaving her simultaneously delighted and nervous about their future.